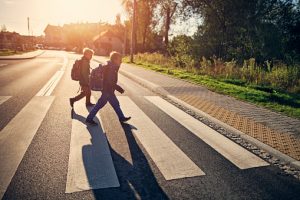 During morning and afternoon rush hours, drivers are often in a hurry. For some, blowing through a red light or stop sign may be tempting, but when it comes to school zones, this type of behavior can put our children in danger. In fact, the majority of pedestrian accidents involving children occur in or near school zones.

According to Safe Kids Worldwide, 456 child pedestrians were fatally injured in traffic accidents nationwide. Washington State had a pedestrian fatality rate of 0.56 per 100,000 children under 19 years old. A total of 10 children died that year due to pedestrian accidents.

The overall rate of child pedestrian deaths has dropped since 1994, but the rate of fatalities among teenagers has gone up since 2013. Data suggests that an upsurge of distracted walking may be the culprit. Despite the growing rate of distraction, drivers are expected to slow down and be prepared to stop when approaching school zones. In many cases, pedestrian accidents in school zones are attributed to distracted driving. In other situations, a school bus stop may be deemed unsafe, which can lead to serious injury or even death. Examples may include:

The impact of photo speed enforcement

A study conducted by researchers at the University of Washington School of Medicine and Drexel University examined the impact of speed limit photo enforcement in four Seattle elementary school zones set up by the Seattle Police Department and the Seattle Department of Transportation in 2012.

The study found that school zone speeding violations typically increase after school breaks, such as weekends, summer vacation, holidays, and week-long breaks. After drivers began receiving citations based on the automated photo enforcement, speeding violations dropped by nearly 50 percent in school zones (which have a speed limit of 20 mph), as opposed to the period when police only issued written warnings.

Why you should seek legal representation after a pedestrian accident

If you or your child was struck by a motor vehicle while using a crosswalk, navigating an intersection, or walking through a parking lot, it’s important that you seek legal representation as soon as possible.