Home > About Us > Chuck Perine

An experienced legal professional who gets results for our clients 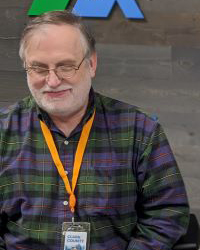 Charles “Chuck” Perine is a long-time Clark County resident and lives with his wife in La Center, WA. He has more than 20 years of experience working in the legal industry and is the owner and sole proprietor of Perine Paralegal Services, a company that provides short-term legal support for attorneys, law firms, government agencies and nonprofits. Chuck’s life and work experience are vast, and good fortune has followed him to all four corners of the globe. Like all great adventurers, Chuck eventually found his way back home, where his story began, right here in the Pacific Northwest.

Chuck’s first job was selling coffee and donuts to hungry lumberjacks in Roseburg. His next job was a paper route in Hood River, delivering newspapers by bicycle to local farmers. He attended middle school in Lake Oswego, and after graduating from high school Chuck attended St. Mary’s College where he played football for the Gaels as a defensive lineman.

After college, Chuck followed his heart to Texas and married the love of his life, Susan. Together, they began a career in the airline industry working for Continental Airlines. Chuck’s positive attitude and outgoing personality exemplified the company’s motto, “Work Hard, Fly Right.” During this time, he worked at virtually every major airline hub in the United States, including international flights between New York and London. Rising fuel costs during the early 1990s signaled a career change, and over the next decade Chuck managed a duty-free import/export business between Portland and Seattle. When the duty-free laws changed, some twenty years ago, Chuck made his final career move and began working as a paralegal, an occupation he still holds today.

In his free time, Chuck enjoys volunteering for the Clark County Election Board and Meals on Wheels program, a non-profit organization that delivers meals to homebound elderly throughout the Vancouver, WA area and Southwest Washington. Chuck is also a current member and past president of the Evergreen Fastpitch Softball Association. He continues to officiate high school and collegiate softball games today, both locally and at the national tournament level.